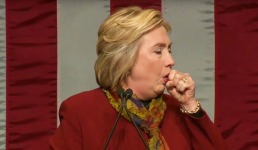 (Washington, D.C., September 15, 2016). It was announced yesterday that Hillary Clinton, presidential candidate, is taking ten days of the antibiotic Levaquin to treat a mild case of pneumonia. http://www.usatoday.com/story/news/politics/elections/2016/09/14/hillary-clinton-campaign-medical-records/90369052/

This is deeply concerning given that July 26, 2016, the FDA announced that “Fluoroquinolones, including Levaquin, have been associated with disabling and potentially irreversible serious adverse reactions that have occurred together, including: Tendinitis and tendon rupture, Peripheral neuropathy, Central nervous system effects.” (FDA website, http://www.accessdata.fda.gov/drugsatfda_docs/label/2016/020634s067,020635s073,021721s034lbl.pdf)

Furthermore, the Levaquin label states, “These reactions can occur within hours to weeks after starting Levaquin. Patients of any age or without pre-existing risk factors have experienced these adverse reactions.”

Because Renaissance Technologies held as much as $3 billion in drug company stocks, this lawsuit claims that Dr. Hamburg and her husband violated the conflict of interest statute that “bars a Federal employee from participating personally and substantially… in any particular matter in which the employee has a financial interest. These restrictions also apply regarding the interests of an employee's spouse.…” (FDA website)

An estimated 5,000 people died and an estimated 80,000 people were damaged after consuming Levaquin without adequate safety warnings while Dr. Hamburg was FDA Commissioner and her husband was Renaissance Technologies Co-CEO.

It wasn’t until after Dr. Hamburg left the FDA that the warnings of disabling and potentially irreversible serious adverse reactions, described above, were added to Levaquin.