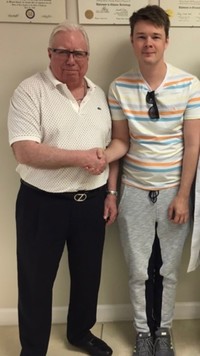 The article by Chuck Ross in The Daily Caller is a clear and provable criminal grand jury leak of Special Counsel Robert Mueller and his conflicted and "rabid" leftist, pro-Democrat, pro-Clinton and anti-Trump prosecutorial staff. By Ross telling Dr. Corsi that his source for the story was "inside information" from Mueller's Special Counsel Office, Chuck Ross has made himself a key witness in Dr. Corsi's $350 million lawsuit now before the U.S. District Court for the District of Columbia, with an initial hearing now scheduled by Judge Richard J. Leon for January 3, 2019. It also proves conclusively that it is the Special Counsel who has committed crimes, not Dr. Corsi, as he has alleged in two complaints which Dr. Corsi has filed in recent days. Go to www.corsination.com or www.larryklayman.com to view these complaints.

Dr. Corsi is particularly sympathetic to cancer victims because of his painful experience with several different members of his family having suffered and died from this most dreadful disease.

Dr. Corsi contends that he did not make a penny from the $25,000 GoFundMe account he helped raise via www.corsination.com. Live Stream broadcasts for Tommy Sickler, a person Dr. Corsi was told and believes to be a legitimate cancer sufferer.

This desperate and criminal smear attack is another indication the Mueller Special Counsel investigation is bankrupt and now desperate both in its two-year, $40 million-dollar and counting failure to produce hard evidence of the "Russian Collusion" hoax and now to find a basis for filing the criminal charges Mueller's Special Counsel prosecutors have threatened have the grand jury issue against Dr. Corsi.

As Dr. Corsi demonstrates in his newly published eBook, SILENT NO MORE: HOW I BECAME A POLITICAL PRISONER IN THE MUELLER "WITCH HUNT," Mueller's Special Counsel Office is ranging far-field, investigating Dr. Corsi on matters unrelated to Mueller's mission to investigate Trump campaign "Russian Collusion," seeking to find any aspect of his 72-year life over which to bring criminal charges, even if unwarranted and unprovable, against Dr. Corsi.

"This recent and latest attack is a vindictive retaliation by Special Counsel Mueller for Dr. Corsi's eBook, SILENT NO MORE, going live on Amazon.com yesterday," Dr. Corsi said. "My attorneys, Larry Klayman and David Gray, are prepared to defend me on all aspects of Mr. Ross's poorly researched story and otherwise, and I refuse to discuss publicly private matters affecting family members. Mueller's apparent determination to attack my family reduces to nothing more than ill-spirited, vengeful harassment."