Share
(Polk County, Florida, February 18, 2020). Today, the legal counsel for George Zimmerman announced the filing of a complaint in Polk County, Florida (Case Filing No. 103505613), against presidential candidates Pete Buttigieg and Elizabeth Warren. The complaint can be found at www.larryklayman.com, alleges that the two maliciously defamed George Zimmerman, using the February 5th birthday of Trayvon Martin as a pretext to demagogue and falsely brand Zimmerman as a white supremacist and racist to their millions of Twitter followers. Their Tweets were well-covered by the media and extensively retweeted.

The obvious intent of Buttigieg and Warren's Tweets is alleged race baiting, in an attempt to draw African American votes during this Democrat presidential primary season.

Both defendants, Buttigieg and Warren, are alleged in the complaint to have acted with actual malice, as it is widely known that Zimmerman was acquitted of murder based on self-defense.

Moreover, as depicted in the recent documentary, The Trayvon Hoax: Unmasking the Witness Fraud that Divided America, the Hispanic George Zimmerman was a minority advocate who was active in mentoring black youth before the tragic encounter with Trayvon. In the well-publicized film, Zimmerman recounts how he was stalked by Martin and badly beaten before he eventually used a lawful firearm in self-defense. The film and a companion book also provide incontrovertible evidence that Zimmerman was allegedly framed by the fake witness, and that witness fraud is the subject of a lawsuit filed in December 2019.

"It is high time that the cheap and harmful use of the race card by politicians of all stripes be made to cease and desist. Their despicable 'race tactics' are not only causing great harm to persons such as my client George Zimmerman, but also are damaging relations between black and white Americans who are all brothers. The nation should applaud Mr. Zimmerman for taking a strong stand and pushing back against hack politicians like Buttigieg and Warren, who know no bounds of decency and frankly could obviously care less about whom they hurt in their quest to dishonesty use and manipulate black voters to win the 2020 Democrat presidential primary."

For more information email to: leklayman@gmail.com 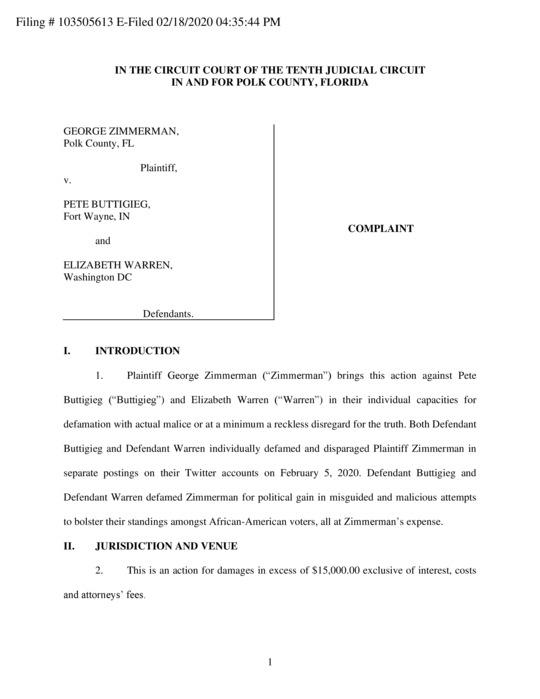