Share
(Coral Gables, Florida January 8, 2020) - Highway 61 Entertainment LLC has filed a lawsuit for $ 670,000 in damages against Coral Gables Art Cinema and the City of Coral Gables in Miami-Dade County in Florida. The lawsuit stems from the December 5, 2019 cancelation of Highway 61's film screening of its best-selling documentary: The Trayvon Hoax: Unmasking the Witness Fraud that Divided America. The lawsuit is "for breach of contract, as well as for tortious interference for illegal cancelation of a theater Rental Agreement contract that was signed and paid for in advance, causing Highway 61 considerable financial harm, harm to its reputation, and harm to its potential to capitalize and benefit from considerable local and national media who had confirmed RSVP to the event."

The Trayvon Hoax film director Joel Gilbert told Miami CBS-4 at the time, "I was shocked. It's really sad that they can do this kind of censorship. We showed it at the National Press Club in Washington DC and there was no problem."

Gilbert's film, which is also a best-selling book on Amazon, alleges a stunning witness fraud took place in the 2013 murder trial of George Zimmerman. Specifically, the book and film allege, with hard evidence as a result of recent investigative journalism, that the key witness for the prosecution, Rachel Jeantel, was an imposter. The real "phone witness" and girlfriend of Trayvon Martin is identified as Brittany Diamond Eugene, and Gilbert exposes the entire alleged witness fraud in every detail.

The Highway 61 lawsuit also alleges that Coral Gables Art Cinema co-executive Director Brenda Moe defamed and disparaged Highway 61 and Gilbert by telling Miami CBS-4, "Gilbert never had a contract and never told them the title of the film." Moe also falsely claimed to The Daily Dot "no transaction had been made" when in fact she knew there was a signed Rental Agreement that was fully paid in advance. The City of Coral Gables is included in the lawsuit in part because, according to Brenda Moe, the mayor of Coral Gables, city council members, and the city attorney had demanded cancelation of the event less than 24 hours before the film screening. 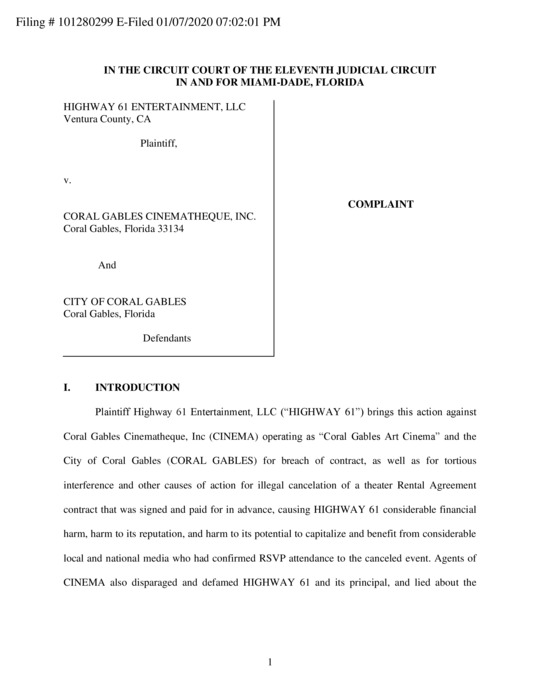