Share
(Houston, Texas, August 16, 2022). Today, Patrick Reed, among the world's most accomplished, young professional golfers, with only one of his many victories coming at the 2018 Masters tournament, sued Brandel Chamblee and NBC's Golf Channel for defamation. See Reed vs. Chamblee, et. al, Civil Action No. 4:22-cv-2778 (S.D. Tx.). Mr. Reed recently joined the LIV Golf Tour. Chamblee, Golf Channel, and the PGA and DP World Tour and their Commissioners Jay Monahan and Keith Pelley, are alleged to be co-conspirators for their anticompetitive conduct and anticompetitive practices in order to destroy the upstart LIV Golf Tour, Mr. Reed, and fellow LIV Golf Players in order to annihilate any competition with the PGA Tour and DP World Tour even if it means violating antitrust laws and going to extreme and scandalous measures to defame Mr. Reed, fellow LIV Tour players, and LIV Golf.

In Mr. Reed's complaint filed before the U.S. District Court for the Southern District of Texas, in Houston, Texas, his hometown, Chamblee and NBC's Golf Channel are alleged to have defamed this world class golfer, by falsely and maliciously branding him a cheater, liar, and a thief and someone who accepts blood money from terrorists. Chamblee also has labeled the 3-Time Ryder Cup player, three-time President's Cup player, two-time Olympian and 9-Time PGA Tour Champion, and Honorary Lifetime Member of the DP World Tour as the "devil" after Mr. Reed's first and only alleged rules infraction he ever had on the PGA Tour. Consistent with this, Chamblee also published that Mr. Reed and his fellow LIV golfers associate themselves with the likes of Putin, Mao, Hitler and Stalin, among many other published smears. Of course, what Chamblee and NBC's Golf Channel are using as a false and malicious pretext to defame is the financing of the LIV Golf Tour by the Saudi Public Investment Fund also known as PIF which has purchased stakes in a variety of investments, including but not limited to Uber, Boeing, Facebook, CitiBank, Disney, Berkshire Hathaway, Electronic Arts. One of its most famed investments and ownership stakes- is in the world renown Newcastle United Football Club.

Chamblee and NBC's Golf Channel have a direct interest in continuing to defame Mr. Reed, one of LIV Golf's top golfers, since the PGA Tour has lucrative contracts with major broadcasting partner NBC's Golf Channel to broadcast events on the PGA Tour and DP World Tour. Existing tournament sponsors and other broadcasting partners would not want to have and continue paying lucrative contracts to the PGA Tour if they have depleted fields, lost marquee players, and are actively involved in anticompetitive practices that violated the antitrust laws. Chamblee and NBC's Golf Channel are allegedly fearful that another major network will acquire the rights to broadcast LIV Golf Tour events, competing with them and drawing away viewers and revenues.

The lawsuit also alleges that the vicious attacks by Chamblee and NBC's Golf Channel are nothing new to Mr. Reed. NBC's Golf Channel and Brandel Chamblee's record will show a targeted effort to destroy a young golfer's name, career, and marketability as a top golfer in the world. This is a continuation of and compounds the past defamatory conduct against Mr. Reed. Chamblee and Golf Channel are alleged in the complaint to have targeted this world-class golfer, manufactured phony controversies, and defamed Mr. Reed to boost their television and broadcast ratings and revenues.

Larry Klayman, Esq., the founder of both Judicial Watch and Freedom Watch, a former U.S. Department of Justice prosecutor, both civil and criminal, and in private legal practice, had this to say in filing the complaint on behalf of Mr. Reed:

"The motivation of the defendants, Chamblee and NBC's Golf Channel, is evident. Working as the surrogate agents for the PGA Tour and DP World Tour and their lawless leadership, their mission is to destroy a top LIV Golf Tour player, his family, as well as all of the LIV Golf players, to further their agenda and alleged collaborative efforts to destroy the new LIV Golf Tour.

"As alleged in the Complaint, these calculated malicious attacks have created hate, aided and abetted a hostile workplace environment, and have caused substantial financial and emotional damage and harm to Mr. Reed and his family.

"While Chamblee's and NBC's Golf Channel's never-ending defamation with regard to Mr. Reed, as set forth in the complaint is not new, with his joining of LIV Golf, it has reached new, intolerable heights. As a result, enough is enough and it is time for Mr. Reed to protect not only himself and his family, but all LIV Golfers who have been maliciously defamed to further the PGA Tour's and the DP World Tour's allegedly illegal attempts to maintain their virtual monopoly and stranglehold over professional golf.

"Neither Chamblee, NBC's Golf Channel, nor any of their alleged co-conspirators, such as the PGA and DP World Tour, are above the law, and they finally will have their day of legal reckoning before 'Lady Justice.'"

To view the complaint, go to www.larryklayman.com . 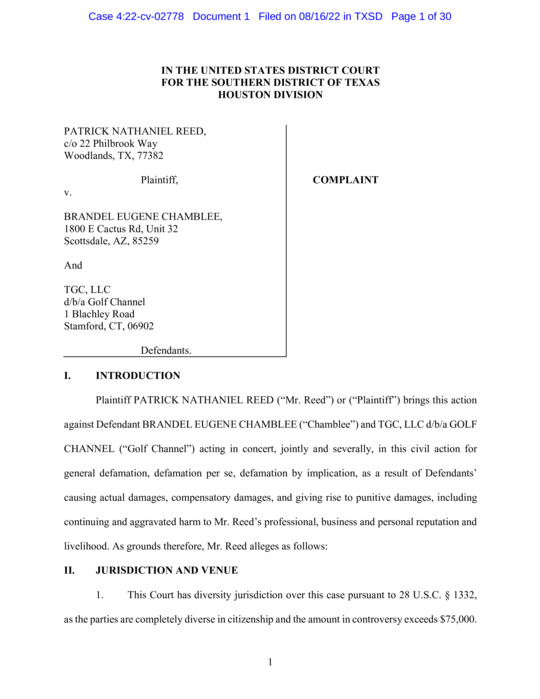