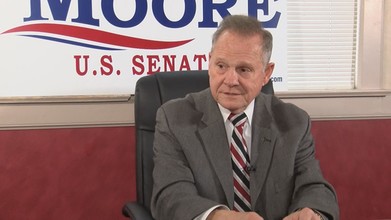 WAFF
August 3, 2020
NEW YORK, NY (WAFF) - Saturday, the Honorable Andrew Carter of the U.S. District Court for the Southern District of New York issued an order allowing for full discovery in a lawsuit filed by Chief Justice Roy Moore and his wife Kayla against Sasha Baron Cohen, Showtime and CBS.

The complaint, which is now going forward -- the Court having denied Cohen and the other defendant motions to dismiss in their entirely in a prior order of July 8, 2020 -- now moves into the full discovery phase, where Cohen and the other defendants, and third party witnesses, will be required to answer questions orally under oath over allegations concerning their having defamed Moore by falsely and maliciously branding him a pedophile in the now cancelled television series "Who is America?"

Defendants counsel Davis Wright had opposed full discovery and attempted to have the Court order only discovery where attorneys for defendants would in effect answer the discovery for Cohen and the other defendants.