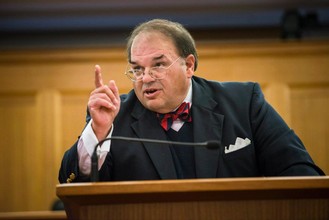 A federal judge has denied the Justice Department's request to delay a hearing in Jerome Corsi's lawsuit against special counsel Robert Mueller, in which he claims he is being unfairly targeted. The government had asked for a pause due to the ongoing partial government shutdown.

Corsi, a Roger Stone acquaintance who testified before Mueller's grand jury, has accused federal authorities of unconstitutionally searching his electronic records and phone.