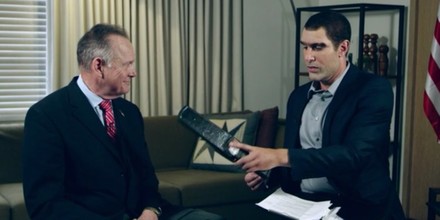 (Washington, D.C., April 29, 2019). Counsel for Chief Justice Roy Moore, Larry Klayman, and his client will appear before the Honorable Thomas Hogan to argue a motion filed by defendants Sasha Baron Cohen, Showtime and CBS seeking to have the case transferred to federal court in New York City, where the defendants obviously believe they will have a more favorable venue given the leftist slant of the judiciary in the Southern District of New York. Chief Justice Moore has opposed this requested change of venue, since the alleged malicious defamation perpetrated against him on the show "Who Is America?", whereby Sasha Baron Cohen and the other defendants defrauded him to appear to accept an award from the Jewish state of Israel, occurred in the District of Columbia.

Appearing in disguise as Israeli Mossad agent Ehud Morad, the low class Cohen waived a device which Morad claimed could detect pedophiles if it beeped, and predictably Cohen made it beep repeatedly, thus maliciously and falsely publishing in the district, nationally and internationally that Chief Justice Moore is a pedophile. Needless to say, Chief Justice Moore is no such thing!

Recently polls in Alabama show that if Chief Justice Moore decides to run again for the U.S. Senate in 2020, he will easily beat any of his rivals, including the current senator of the state, Doug Jones.

Klayman has this to say about Cohen's, Showtime's and CBS's malicious defamation, calculated to turn a handsome profit for the defendants at the expense of Chief Justice Moore, both a distinguished jurist and a person of deep faith:

"The Defendants can try to run to New York City where they obviously believe that a leftist jurist will be more inclined to dismiss the case, but they cannot hide from the egregiousness of their cheap and vile acts. I am confident that Judge Hogan will see through this charade and allow the case to go to a jury of the parties' peers in the place where this case belongs, the District of Columbia."

The defamation complaint filed against Cohen, Showtime and CBS can be viewed at www.larryklayman.com.

Following the hearing, there will be a press conference at the Third Street exit/entrance of the courthouse with Chief Justice Moore, his wife and his counsel present.